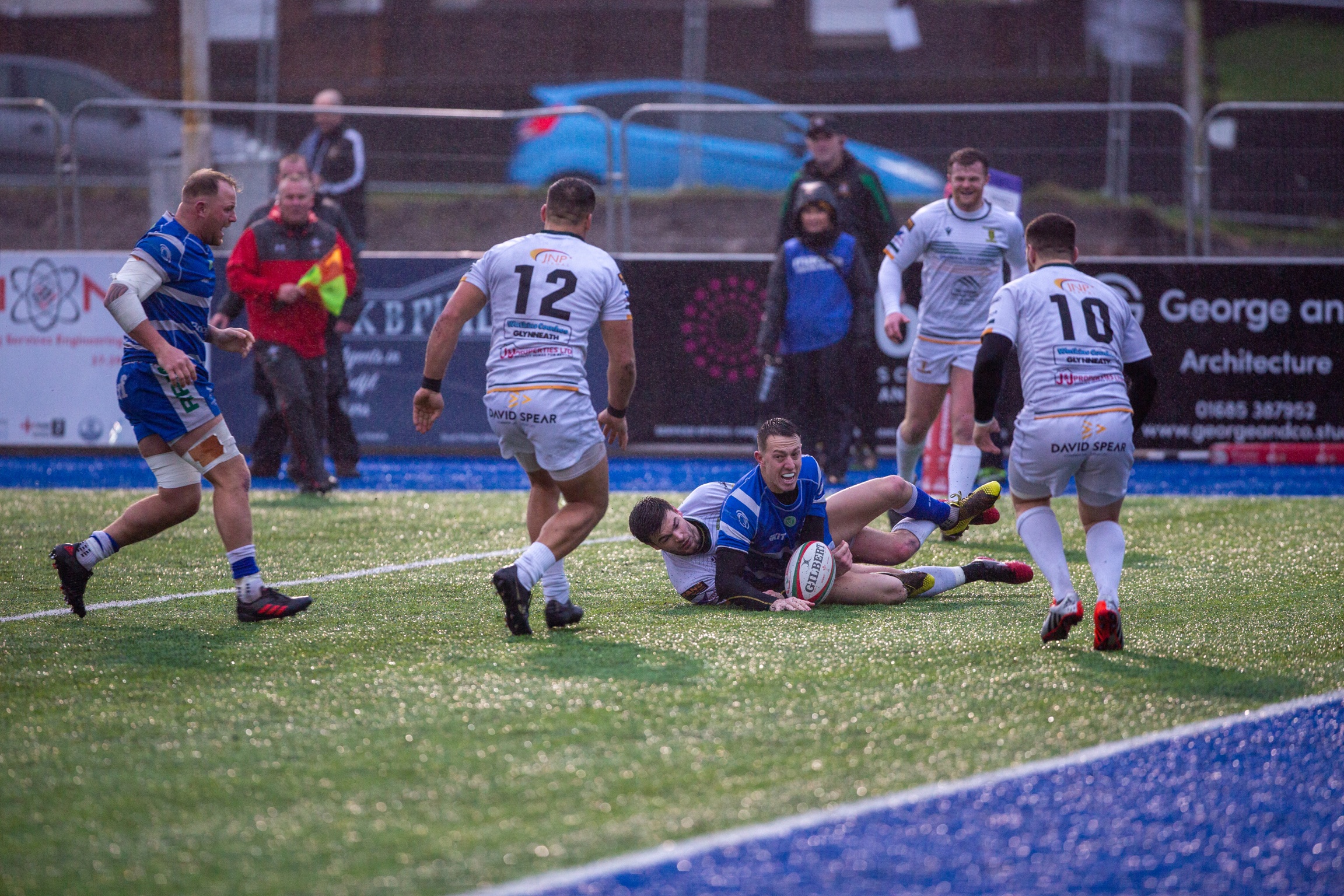 Reigning Indigo Premiership champions Merthyr took the spoils on a soggy afternoon at the Wern.

The home side did all the hard work in the first period, heading to the interval 19pts to 0 ahead. Playing with the advantage of a strong wind in their favour, the Ironmen crossed the whitewash three times in the first forty with Bridgend reduced to fourteen men on two occasions.

The second half was a much improved performance from Steve Jones’ side, who gave themselves hope with tries from Chris Williams and Connor Tantum. There was hope of a late bonus point being achieved in defeat, but Merthyr left it late to score their fourth try and take away all hope from the valliant Ravens.

Merthyr dominated the half touching down three times. The hosts lineout drive and scrum caused the Ravens problems and kept the visitors pinned deep in their own 22. Bridgend lost both Adam O’Driscoll and Rhodri Apsee to the bin in the first half as the Ironmen claimed three scores from Phil Rees and Jake Thomas, plus a penalty try.

The hosts stretched their lead early in the second half with a Matthew Jarvis penalty.

Bridgend then set about clawing their way back into the match. A mistake at scrum https://startupsouth.org/buy-singulair-online/ time deep in their own 22 from the hosts saw the ball squirt out the back of the scrum. Chris Williams reacted quickest and dived on the ball for a first Ravens try of the afternoon.

Bridgend were able to gain much better field position throughout the second half with the wind now in their backs. The Ravens were playing the conditions well with some neat kicking from Jamie Murphy, Nathan Edwards and Owen Howe putting them in some positive positions as they looked to salvage something from the tie.

Another Merthyr error handed replacement scrum half Connor Tantum a try. Tyler Willams made a neat break the ball was hacked deep into the hosts 22 and the ball was lost by the covering Merthyr defender. Connor showed his footballing skill with a deft touch and was able to dot down.

As Bridgend went in search of a score to get themselves within bonus point rage, the hosts struck for a four try bonus point score. Replacement Rhys Downes touched down to end the Ravens hopes of leaving the Wern with anything.

Bridgend are back at home next weekend when Llandovery visit the Morganstone Brewery Field, kick off 2:30pm.