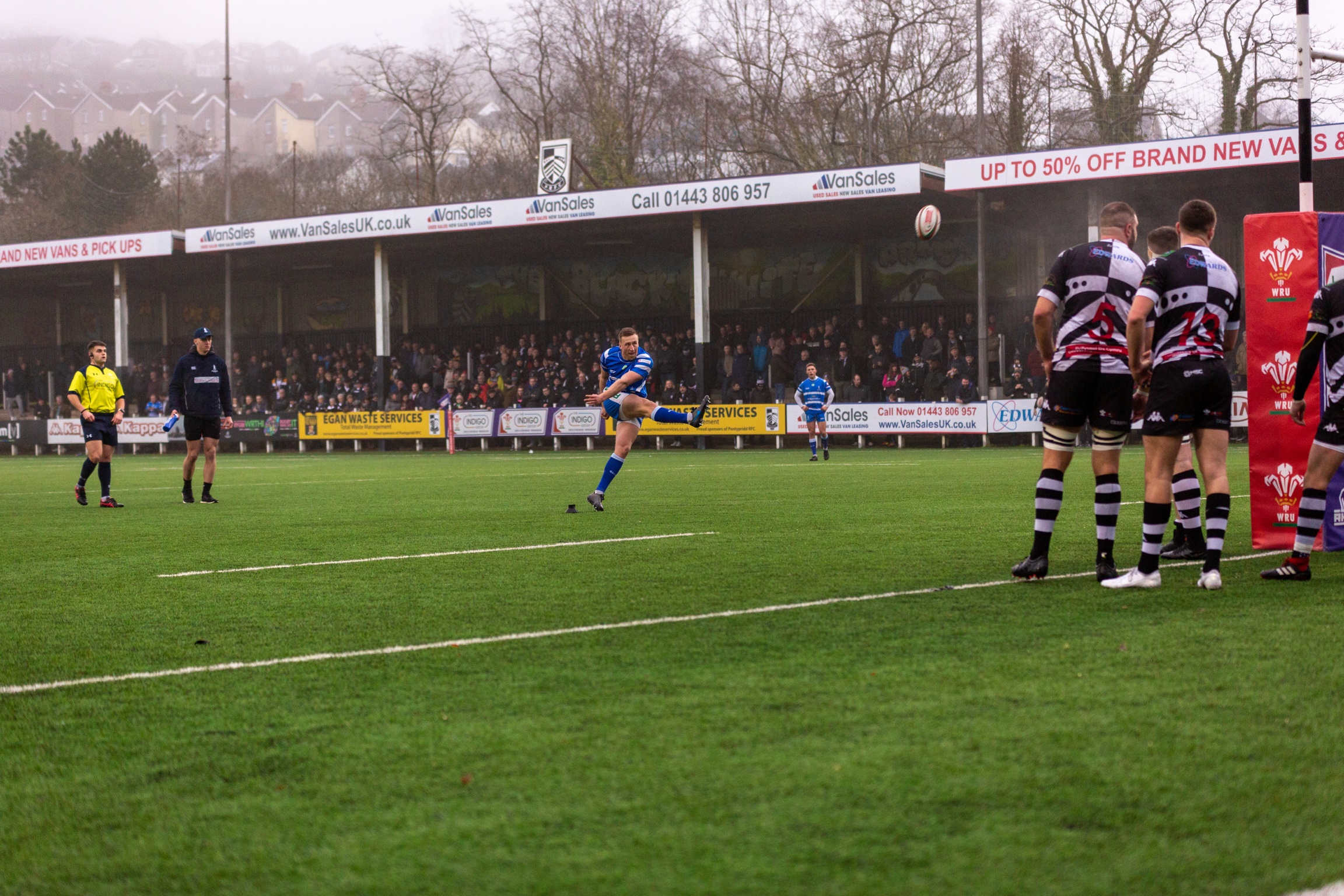 There was more late heartbreak for Bridgend as they slipped to an 80th minute defeat at Sardis Road on Saturday afternoon.

It was another last gasp defeat for the Ravens, a last minute Pontypridd try downing Bridgend for the second time this season.

A hugely improved first half performance from Bridgend saw the Ravens lead by a point at the break. Owen Howe landed three penalties in the opening quarter to push Bridgend into a nine nil lead.

Some fine attacking play from Gareth Harvey saw Connor Tantum go close before the diminutive scrum half was brought down illegally, resulting in a 10th minute Jamie Hill yellow card.

Ponty’s Diggy Bird struck back from the tee as a quick tap penalty saw Joe Grabham halt the attack from an offside position. The flanker was shown yellow just after the 20 minute mark seeing the hosts close the gap to 6.

Pontypridd got back to within a point as Bridgend were unable to halt the hosts’ driving maul. Rob Jones touching down. Bird sent the conversion wide, seeing the Ravens hold a slender one point halftime lead.

Pontypridd came out in the second half looking for an early score. The Ravens effort in defence saw the hosts shunted back, not giving an inch. Bird was forced into a drop goal effort that was sent wide.

Pontypridd struck for a try of the season contender at the 50 minute mark. Fielding a kick at halfway, the Valley Commando’s backline ran some excellent support lines coupled with good https://www.thecourtyardclinic.co.uk/buy-viagra-sildenafil-online-uk/ offloads to break. Rob Jones raced into the Ravens 22 finding Mason Grady who touched down out wide. Bird sent the conversion wide.

Bridgend hit back with a well-executed try of their own 10 minutes later. Dewi Cross, showing his aerial skill, expertly claimed a high ball under pressure. Strong carrying from Ben Jones allowed Chris Williams to put in a competitive kick which Cross again chased hard. The Pencoed product came away with the ball and quick recycling saw a perfectly struck cross kick from Supporters Man of The Match Jacob Chilcott. Caine Woolerton won the race out wide to touch down, handing the Ravens their slender one-point lead back.

With five minutes remaining, Chilcott added three from the tee to give Bridgend a four point cushion. Dewi Cross and Jamie Murphy fielded Ponty’s aerial attacks well as the hosts resorted to the high ball trying to gain some field position. Bridgend were able to work upfield well and Chilcott landed the three pointer.

It was a case of deja vu for the Ravens though, as with the match nearly up and Bridgend defending a slender lead, Pontypridd snatched the win with a last minute try. A trend that’s appeared too many times for the Ravens this season.

Whilst the performance is encouraging, points are very much in demand at this stage of the season, and another last minute defeat was a cruel blow to the visitors.

Bridgend are next in action when Llanelli visit the Morganstone Brewery Field on Saturday 15th February, kick off 2:30pm.