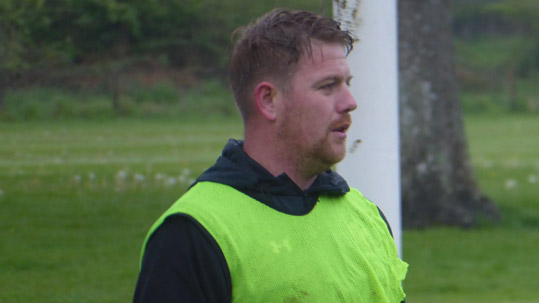 Bridgend Ravens are pleased to announce the addition of Matthew Jones, who joins the club as Player/Backs Coach.

37 year old Jones replaces Tom Grabham as Backs Coach who departs the club due to work commitments. All at Bridgend Ravens would like to thank Tom for his efforts as part of the club’s coaching team which he joined in 2019 and wish him all the best for the future. Matthew will be available for playing selection alongside his coaching duties, adding experience to Steve Jones’ young and talented back division.

His career started with Neath, where he was a key figure in their early dominance of the semi professional game in Wales. His form saw him rewarded with an Ospreys contract and a call up for Wales u21 Grand Slam winning side of 2005. He was then given the honour of representing Wales at senior level, in a 60pts to 3 win over Canada.

Jones is no stranger to the Bridgend jersey, having previously represented the club over two spells. He played initially on permit from the Ospreys, but after a move to Moseley was cut short, he returned to the Brewery Field in 2007.

His next move was back across the bridge, playing for London Welsh and Worcester before coming back to Wales in 2010 to join the Dragons. He enjoyed a two year stint at Rodney Parade, then turning out for Bristol and Coventry in the English Championship. Jones then switched back to Wales, joining Pontypool in 2016.

Matthew played a vital role in Pontypool’s domination of the Championship in which they secured three consecutive league titles. A brief stint at Neath in 2019/20 followed, but he now moves to Bridgend in time for preparations to commence for 2021/22.

Team Manager, Ed Griffith, was pleased to secure Matthew’s services for the new season; ‘The appointment of Matthew Jones as player coach provides the club with an exciting combination of leadership, expertise and experience to drive the club forward in its desire to challenge in all competitions.

Matthew returns to the club having spent a spell here as a player and now returns with a dual role, in charge of the backs and being available for us on the field. Having spoken to him at length, he brings with him fresh and innovative ideas that we’re really excited to see him implement.’

After putting pen to paper, Matthew said; ‘I am delighted to have committed myself to Bridgend and I’m very much looking forward to working with Steve, all the coaches, backroom staff and players for the new season ahead. Bridgend is a great club with an incredible history.

It’s a fantastic opportunity to continue and develop both the team and myself within a player/coach role. I had a couple of short but enjoyable spells playing for the club back in 2006 and 2007 during my time at the Ospreys. It’s great to see some of the faces involved back then still involved now.

It’s been a very difficult and challenging 14 months for Welsh rugby but it’s very encouraging and exciting to see that the club has been very active recruiting and strengthening the squad. It’s also very positive to see the plans set out to develop the club both on and off the field.

I’m looking forward to getting back onto the Brewery Field, playing fixtures in front of the fantastic support the club has.’