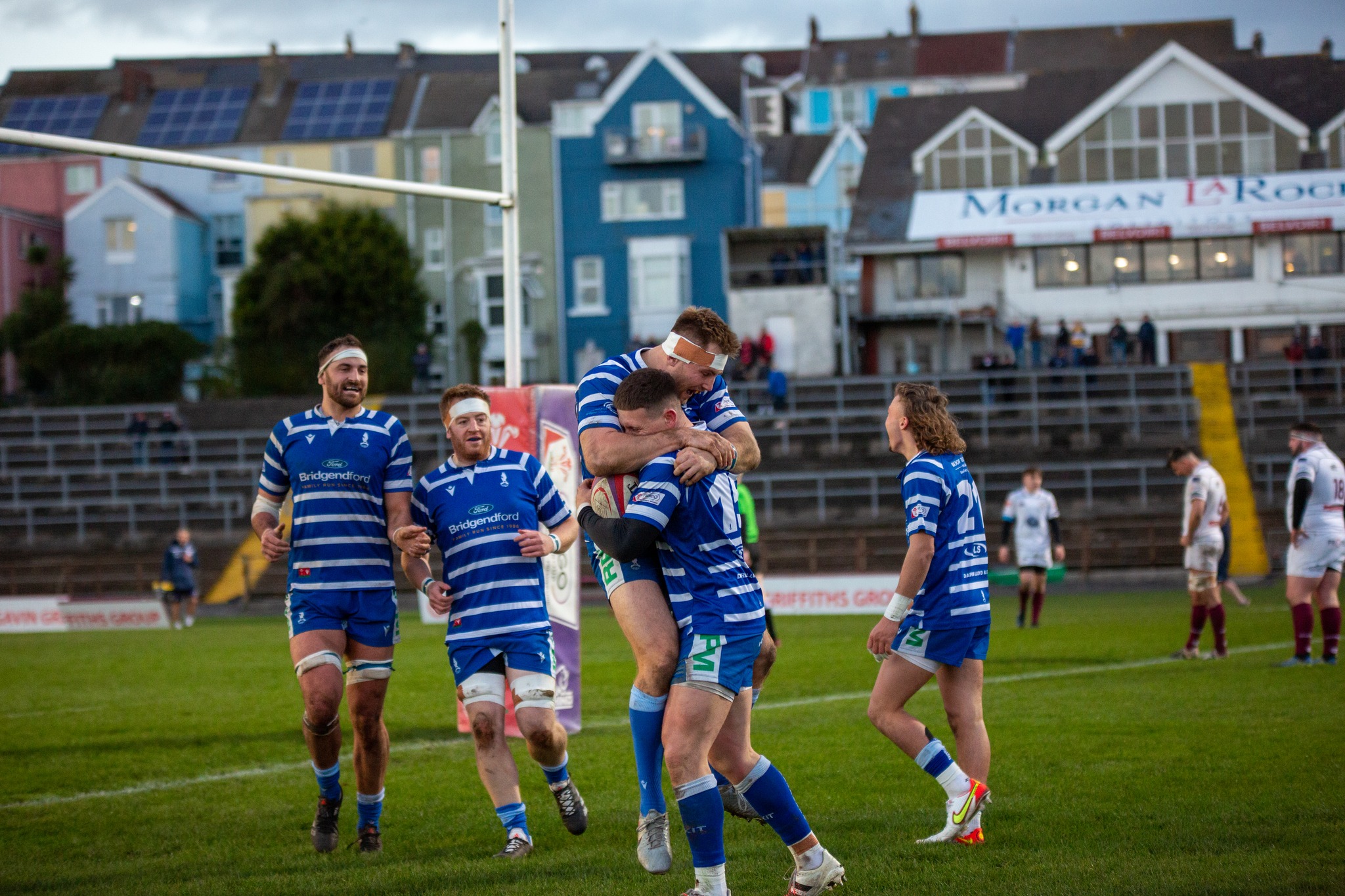 In season 2019/20, Bridgend were notorious for losing games late on but Saturday’s 80th minute stunning solo winner by Edd Howley turned those fortunes on their head. The Ravens victory means that they finish the Cup campaign in fourth place, with a quarter final against Newport at Newport Stadium set for sometime in the New Year.

It was tentative start to proceedings, not helped by strong winds on the Swansea seafront. This saw the first quarter pass without either side troubling the scoreboard.

A first score of the match arrived thanks to loose kicking in the Swansea ranks. Edd Howley, voted by the traveling supporters as their Man of the Match, launched the counter attack from deep, breaking through a ragged defensive line, Howley found Cameron Ellis who raced over for the opening score. Matthew Jones added the extras.

Swansea’s maul caused problems for Bridgend and at the half hour mark, thanks to the power of the hosts maul, Bridgend lost Kieran Martin to the bin. The home side wasted little time to take advantage of the extra man, a quick tap penalty from former Raven Connor Tantum saw Llien Morgan score out wide. Liam Popham converted expertly from the touchline to level.

A frenetic start to the second half saw Bridgend on the front foot but unable to get over the whitewash. A no-arms hit on Chris Williams saw former Ospreys favourite Hanno Dirksen shown yellow. Matthew Jones added three from the tee following the card.

Just minutes later, Dafi Davies was shown yellow for a similar action allowing Popham to once again level the scores.

Bridgend saw a third yellow as another Swansea maul was adjudged to have been illegally brought down by Huw Thomas.

Liam Popham added his third penalty, pushing Swansea into the lead for the first time in the march as we headed to the final 10 minutes. Matthew Jones, after pulling an earlier shot at goal, then levelled 6 minutes later, setting up a tense final 5 minutes with the score locked at 13 apiece. Bridgend’s set piece was now firmly on top as they pushed for victory which would see them leapfrog Swansea into fourth place.

Special players make special plays. Up stepped Edd Howley to score a try of the decade contender, despite it being 2021.

The fullback hacked ahead on the half-volley, chasing hard, the big awkward bounce saw the ball sit up perfectly for Howley to head the ball over the covering Popham, where the Ravens fullback was able to regather the ball and score, sending the vocal Ravens faithful into raptures. Jones converted to put Bridgend back into the lead. There was still time to play though, and Bridgend defended valiantly to round out a tough and tense match which saw Bridgend bag fourth spot in the Premiership Cup West table, securing a quarter final spot later in the season.

That game rounded off the Indigo Premiership Cup Group phase, with the League starting for both sides in a fortnight time. Bridgend travel to Eastern conference winners Newport on Saturday 11th December, with Swansea facing Aberavon in the televised match on Thursday 9th December.